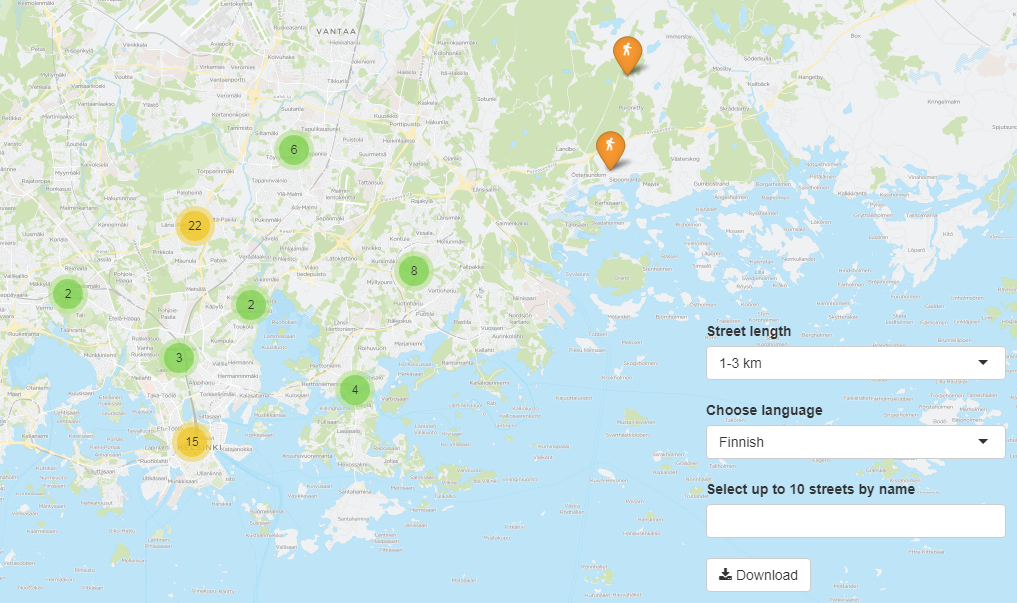 Walking is fun, and there are always new ways to move forward, literally. Some people (not unlike me) have had this silly idea to walk all the streets of Helsinki, in alphabetical order. Johannes Laitila is one of them, and his blog is a good read (in Finnish). Recently Sanna Hellström, the head of Korkeasaari Zoo and former member of Helsinki City Council, mentioned in Twitter that since last fall, she had started to follow in Johannes’ footsteps.

Sanna’s tweet made me think about the size of her plan.

Spatial data of addresses of Helsinki are available from the city’s WFS API, via e.g. the key data site of Helsinki Region Infoshare. Of course addresses are not quite the same thing as streets but will do. Because addresses can refer to almost anything urban, I filtered them with a list of Official street names, the domain name of which tells something about the pragmatism of my home city; the name translates to Plans for cleaning.

The number of unique address names in my filtered data is 3788. The total sum of the geographical distances of individual addresses is 783 km (486 miles). There are some caveats though. Firstly, not all streets are populated by addresses from start to finish. In my home suburb Kulosaari for example, the two longest streets are Kulosaarentie and Kulosaaren puistotie. However, the former starts as a motorway exit road and meets its first address only after a few hundred meters. The latter is equally without addresses a long stretch from both ends. Secondly, distances are not calculated by the street level, so the meters you walk are bound to be more than what the figure says, except in those rare cases where the street forms a straight line.

Anyway, let’s assume a very rough error rate of 20 km to end up to a convenient total length of 800 km. To put that in perspective, Sodankylä, the venue for the legendary annual Midnight Sun Film Festival in Finnish Lapland, is about 800 km North from Helsinki. Given a modest rate of 5 km walking per day, starting about now, I’d reach Sodankylä in time for the next festival. In Helsinki, were I to walk one or two streets every weekend, the project of Walking Them All would be finished in 15 years.

The opening state of the interactive web app hkistreets that marks the first and last address on every street, shows how the bulk of them is spread along the North-South axis. Helsinki sits on a tip of a peninsula with a slight bending towards right. This North-Eastern area is fairly new. In 2009, a slice of Sipoo was annexed in Helsinki.

Notice the few markers above the sea. Helsinki occupies 315 islands, and from these, a couple have got an address which reveals that there’s something else on the island than just summer cottages, if anything. Rysäkari for example, the most Southern island, is a former military base, and a future tourist attraction (news in Finnish).

Most of the streets of Helsinki can be walked in 5 minutes if you are in a hurry; over 90% are under 500 m (1640 feet). 6% have only one address which means that they are an obscure lot. Either the street do is short or in fact it is some other place of interest (to be cleaned) like the centrally located square Paasikivenaukio 2 with the 40 ton granite statue of the former President of Finland Juho Kusti Paasikivi. 2% are under 1 km, and 0.9% between 1 and 3 km.

Only two streets in Helsinki are longer than 3 km. Mannerheimintie is a giant, almost 14 km, and known to all, whereas Jollaksentie (5 km) in South-East is a less visited suburban stretch. At the end of it, you are close to the last big unbuilt island of Helsinki, Villinki.

Google Street View does not cover all coordinates in Helsinki, as neat as it would be – sometimes because my coordinates are too far from streets – so popup links will often hit a black screen. Technically, I guess I could scrape all targets beforehand and only serve those that have something to look at, but Google TOS might not like it so I’ll let that idea be.

The R source code is available at Github.